(RM) runs the maximum amount of workers that your CPU and ram permit. RM also can be made to allocate your unused CPU power to the GSB cloud. This will help increase GSB cloud power for all. If the computer runs out of CPU or ram, the GSB workers that use the most ram will be killed. Managers are never killed.

RM also updates managers & workers to the newest version, before they end up being posted on the forum.

RM is only for GSB users who have purchased GSB within the last year, or have current software maintenance paid.

Make sure you allow RM to auto update too the latest version.

GSB ResourceMonitor default configuration is to run GSB workers when windows boots up. This is strongly not recommend if your computer is used for live trading. If you are using the computer for live trading, Workers should be scheduled to only run during times when the markets are closed. There is also a small danger that you run out of ram. RM is designed to stop this, but in rare situations it may occur. No liability is accepted for such an event.

Please read the documentation for more details. This version has auto detect settings based on ram size, but the settings may not be perfect for your needs. The default settings will also give some of your resources to the public GSB cloud. This has been very popular with users because it means all users get more cloud power when they need it. When you use your own manager, the free cloud workers will be terminated.

Note in the example above.

Priority of these is 10 - the highest possible.

Because these workers are idle, workers of lower than 10 priority start to be run.

If one GSB user tries to use gsbcloud1_passoword1234 or gsbcloud3_password1234, they will get 10% of whatever is in group default.

This line for advanced users only- if you don't under is ignore this line. (Default = your unique machine ID. If you had day 5 computers with group called "My5Pcs" the GSB user would get 10% of the 5 PCs.)

This means if there is only 1 GSB cloud user, you might have 5 workers running, then the cloud user will only get one worker, and 4 remain idle.

To fix this issue, if we run 40 cloud workers, the GSB user will now get 4 workers. Lets say however that 40 GSB users start using workers on GSBcloud1_password1234.

In this case the ram and CPU will start to rise. WHen the max CPU or free ram has been hit, the worker(s) with the most ram are killed.

If the worker is for you only, then set the group % to 100%, and auto share in machine and network to true.

Put RM in a folder of your choice, -but not a folder with any GSB.exe files. The reason for this is they share the same dll's, but different versions. Using the same folder will kill RM and GSB.

The default path is now c:\GSB\GsbResourceMonitor\

Tweak the settings in red and orange if needed. New installs of 20190618.1 build will be correct for most users. Red is critical you set to false if the computer is used for live trading. (exception can be if scheduler is used)  if need. The paths are critical to match your GSB folders.

Save your settings when done. 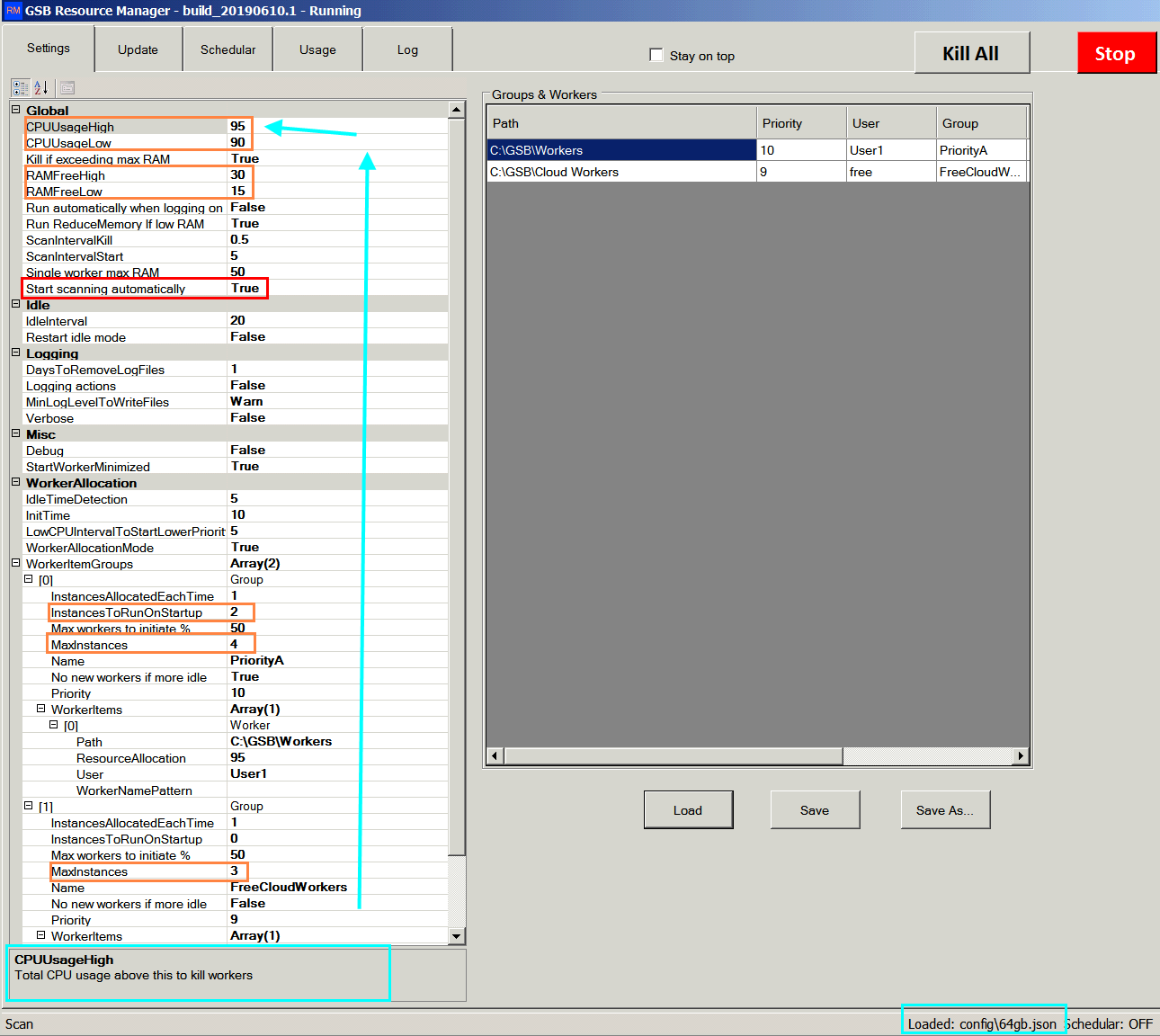 If CPU >CPUseageHigh, workers will start being killed.

if CPU < CPUsageLow then new workers may be opened.

If Free ram is greater than RAMFreeHigh the new workers may be opened.

IF Free ram is less than RAMFreeLow then workers will start being killed every scan interval. (0.1 minute shown)

Every ScanInveralStart a new worker will be opened if ram, CPU and maxInstances per group is not exceeded.

All newer builds leave this to true.

This will cause problems with any manager that's opened. It is a little annoying to get new

workers pop up on your desktop from time to time.

MaxInstances is the very max amount of workers that can be run in any group.

ProirtyA is a label for the user only.

Most users will set this to 100%, so the GSB cloud only gets your CPU usage when you are not using the workers.

User is a label for the user only.

Path, this must lead to where your worker resides.

Multiple groups can be made.

IE priority 10 group for your own workers

Old files are now over-written. This is needed to keep the shortcuts from your desktop to GSB up to date.

For a new install, an estimate of the correct settings will be done based on the computer ram size.

Run automatically when logging on.

This starts RM when your computer boots up.

This means RM will start workers as soon as its run. No need to hit start button.

This will run x workers each time RM wants to add more workers. Not recommend unless you have lots of ram.

This will run x instances as soon as a RM group becomes active.

CPU temperature is now measured, and can be used to kill workers if the machine gets too hot. This is useful also to keep a computer quite when its hot.

This build on-wards automatically updates to the newest RM.

Reporting to the amount of cloud that's being used and is free. ALL PREVIOUS BUILDS OF RM WILL NOT WORK.

See this link for live charts.

From the example below, you can see the GSB4 machine is donating all CPU being used to the public free GSB cloud. 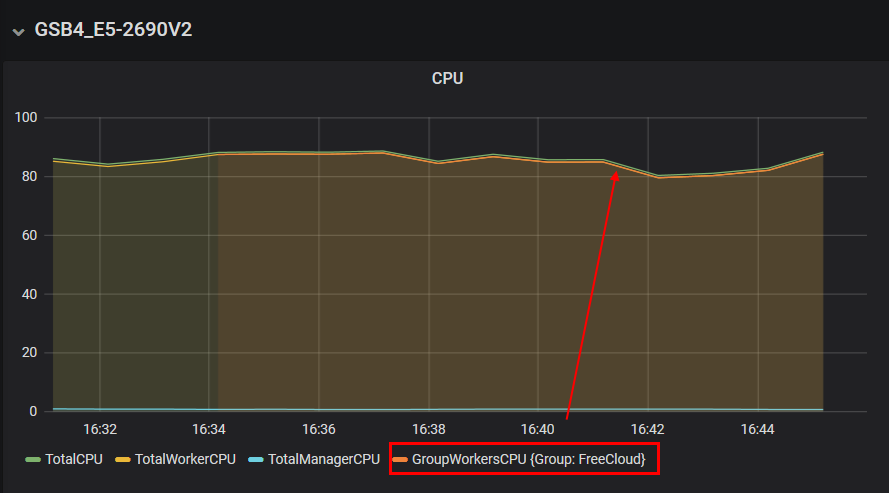 Kill any workers that use more then 50 GB each. (soft-coded amount)

Limit reduce-memory from being run more than 4 times per hour.

Sub-directories can be downloaded by RM. This was needed to retrieve GSB macros.

It is possible on rare occasions the ram usage of a worker will get to high. If this ram limit is exceeded, the worker will be killed. 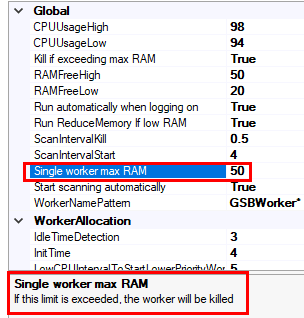 Rm can now run Reduce Memory app. This forces ram into virtual memory. The ideal is this rarely happens, but it may allow you to run more workers.

If you run RM as administrator, the Reduce Memory app can also put system app's into virtual memory.

Thanks to https://www.sordum.org/ for the Reduce Memory app. They have a number of good apps and I'm sure will be happy with any donations.

Below, Reduce Memory app runs at 15 and again at 17 minutes.

Your manager should have workplace gsbcloud installed. If not you wont get use of the public cloud.

If enabled, all workers will be killed during 8:29 to 15:16 in the example above. Default not enabled.

Note in the two examples above, when lots of workers started, the count of workers dropped from 60 to 9 as CPU limit was exceeded.

Workers will auto update to the newest version. However the manger will be put in the path above.

A manger is the same file as a worker, so if you need a manager, you can just rename a worker file. Its the file name that determines its function.

Rm will update all worker that are open, and auto detect the worker path. RM will fail if the file name is GSBworker.exe. The worker filename must included the version number. ie Gsbworker.50.79.exe

If workers are busy, the update will occur when the worker is idle.

Stay on top will make RM stay on top

Kill all will kill all workers

stop will stop RM, but not kill workers.

Kill a group of workers, manually a worker.

Go to the Usage tab, then right clock the group you want to add a worker, or kill the entire group.

RM can be run in a shared dropbox folder, or any other folder. The settings that are saved are always unique to each machine. So two computers in the same folder will not share the same settings files.

Important messages are when RM has done something, not errors.

RM is free but will run for 30 days in trial mode. Ideally before the trial has expired, email the two registration numbers. Do not close down RM until you have the registration code back from support. If you do the numbers will have changed. It is fine to leave one RM at the registration screen, and another running.

RM is free, but only for GSB users who have purchased GSB within the last year, or have current software maintenance paid.